Question: How to prepare the background for connective tissue networks?

Background: When I tried to increase the scale of the connective tissue networks from 10″ x 8″ to 16″ x 24″, I could not fill in the background at the same time as building the connective tissue network. I need to figure out what kind of background will enhance the shape of the network. I would like the background to help pop the network out into three dimensional space. Here’s what I thought to consider before starting to paint.

geometric patterns found in the networks

Since hexagons create the most stable types of networks due to the way the angle distributes force, I’m going to guess this is the most likley shape I should be working with.

-fade can be low or high contrast

-range of colors, I usually try and make sure that all of the colors can blend well together. This generally means working with around 270 degrees of the color wheel. I tend to ditch either yellow or red. I always hang onto the blue.

Painting: As the networks emerge the 3d space cycles through patterns of growth and then collapse. Someday I will figure out how prevent the collapse, but first I must figure out how to prep the canvas for coming of the network.

Method 1= no plan, practice the network and see what happens 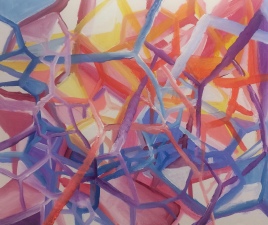 It looks best and is easiest if the white spaces get filled in as early on in the process as possible! Preferably before formation of any sharp lines.

Method 3= cover the canvas with a transitional fade before starting to create the network. 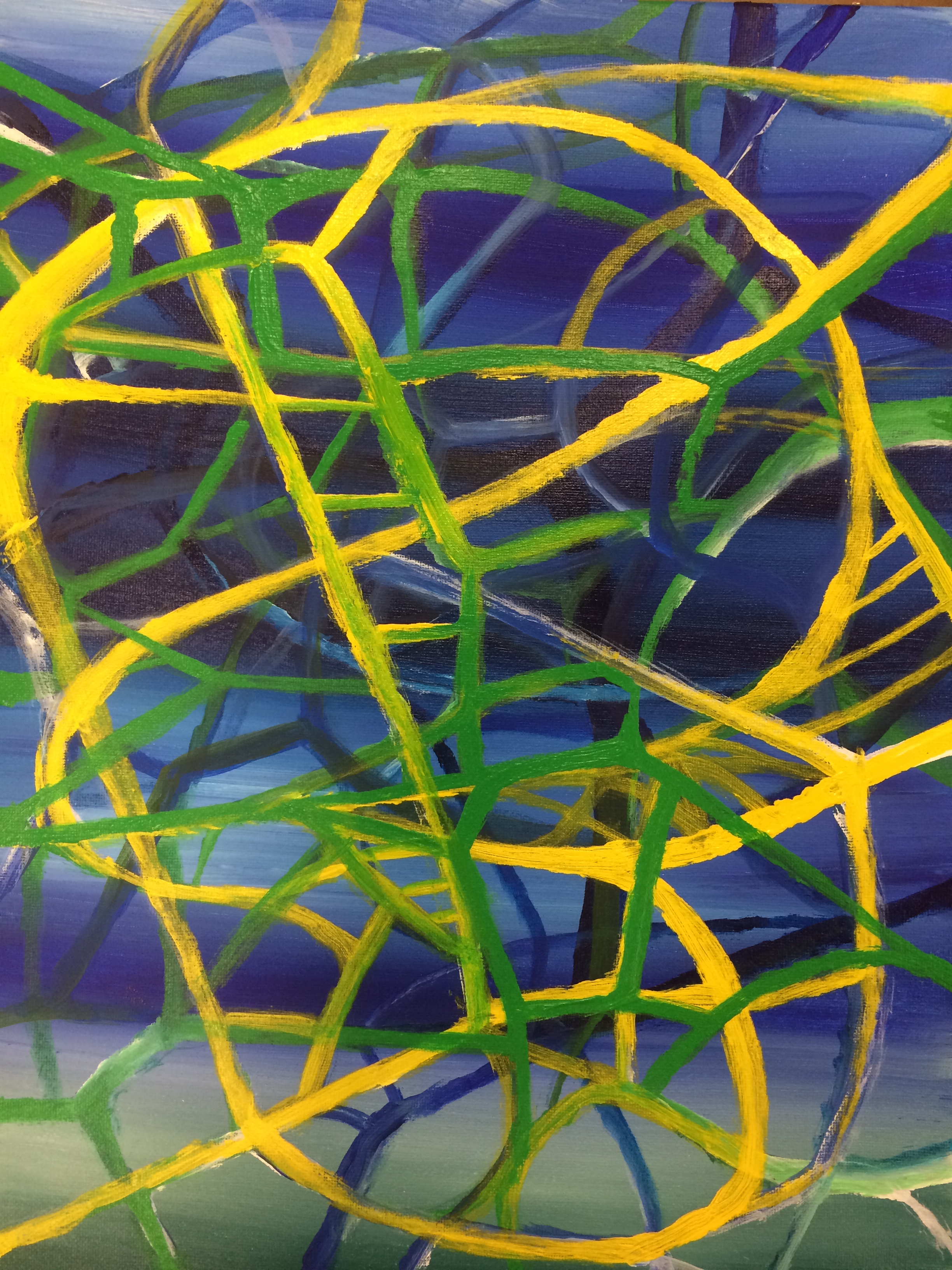 The fade background could help save a lot of time and aggravation by skipping the step of filling in the white space. I think if I want the painting to be lit up from behind and have an inner glow I need to increase the intensity of the fade and focus on bringing in color bidirectionally instead of fading color in stripes. I recently learned that if you contrast white with color in the background and solid colors in the foreground it will pop open the space on the canvas. I’m excited to see what happens when I try this because I always seem to do the opposite technique and I wonder if this could be the missing element I need to make the networks pop.

The combination of tape lines with the geometry of a network and transition of light and color intensity in the fade method is perfect for the connective tissue network. I know I will be exploring a lot more of this method in the future and will do an entire experiment centered around this idea. The most exciting part of the tape background method is that you can rip the tape in half and paint up to a soft edge or use the edge of the tape to create a hard edge. I discovered this trick totally  by accident. Again this brings about the idea that in order to create you must remain in the present moment. Creators often struggle and stress over trying to manifest their true vision. I have learned it’s best to plan and think about your vision before you start to create. Then when I’m ready to start creating the vision I keep it in the back of my mind, but focus my full energy and attention into whats unfolding right in front of me. This is part of finding the balance between making something happen and allowing the universe to flow in its natural direction.

The larger networks of connective tissue paintings need to have a background completly filled in before the formation of the network. The next step is perfecting the network is figuring out how to work with the intensity of color and light in order to increase the three dimensionality of the painting. At the same time I want to keep in mind the idea of harsh versus soft angles in the lines. Most of the networks created in experiment where made of mostly sharpe angles and taught rope. Real connective tissue has a balance of taught and loose ropes which represent the two different fibers, collagen and elastin. Eventually I want to get back to representing the real histology of connective tissue networks, but first I must learn the basics of how to paint a network.